What has Art in Ruins been doing the last few years?

In 1991 we made an exhibition called Conceptual Debt which as the title suggests contaminated conceptual art with issues of Third World Debt, global capitalism, migration etc. It was exhibited in various forms in various places in Europe but it was not until 1999 that we exhibited the works in this country.

We had to wait for the British artworld to catch up with us … and then the Battle of Seattle happened just before the beginning of the show! (1)

Today it seems that writing about dropping the Debt is cool, thanks to all the lifestyle and fashion magazines.

So now that this is on the agenda, we have decided to turn our attention to making sure that the career of Art in Ruins does not get written off along with the Debt … (laughter)

Does Art in Ruins have an agenda?

We were never attracted to the heroism attached to the social status of the ‘artist’ or ‘architect’ either in terms of persecution or celebration. We tried to side-step the issue by inventing a project called Art in Ruins founded like punk in response to absolute exclusion.

If it is true that the “value of the art-critical system, which includes the whole network of curators, gallerists, critics and associated cultural functionaries, is to distinguish the Charlatan from the Professional” then we would say that it is one of the duties of the artist (and artwork) to make that act of segregation as difficult as possible.

How does Art in Ruins relate to the artworld?

We view our relationship with the artworld as an “involuntary collaboration” … (laughter).

A while ago we were introduced to the art editor of Dazed and Confused magazine who said “Of course I know who Art in Ruins are … you kicked down the doors and our generation rushed in and took advantage.”

The recent success of “bad boy/bad girl” art is nothing more than a trompe-l’œil to disguise the fact that no-one today breaks ‘the rules of art.’ (Bourdieu)

We should say that it may be that it is our extremely visible failure to be indexed in the recent history of the dominant culture that is our greatest success.

Does Art in Ruins define itself as political artists?

When we arrived in Berlin we made an exhibition called Propaganda as Readymade (in collaboration with the cultural wing of the ANC, first shown in London in 1991) which focused on the relationship between art, advertising, celebrity culture, solidarity and apartheid; between aestheticisation and instrumentalisation.

Six weeks later we spoke to a woman running a gallery who was complaining that everyone now only wanted to do something that had not been done in Berlin before. We told her that was what we also wanted to do, and we did – we did something that has never been done anywhere before – we repeated the same show … and it provoked a scandal! (2)

We simply said that propaganda works through repetition …

In modern democratic society it is the first duty of any institution or discourse to question and continually re-define the nature of its procedures of legitimation. As a self-invented project it is precisely our aim to call into question the operation of those procedures, partially by asserting our democratic right of participation … (laughter)

Should (can) art be a force for political and social change? If so how can it achieve change?

Like democracy itself, the world of art is a battlefield; a site of inescapable conflict, which however, is more often than not simply reduced to art history, that is, to frozen gossip.

For us the value of art and artistic practice lies in its relationship to society as a whole, not just to art history, managerial initiatives, good taste or bad habits.

The promotion of “Cool Britannia” comes at a time when it finally becomes clear that politics is merely a branch of aesthetics – that is, nothing more than the (failed) management of appearances.

What seems to have been lost today is the social transformation implied by the avant-garde (having been reduced to a merely personal liberation.)

As we already said in 1994 “In the war between democracy and capitalism which seems to be all that is left we are definitely on the side of democracy.” (3)

The radicality of Reclaim the Streets and others is not a matter of political content; you hear about global warming on the weather forecast; Christian Aid had a poster campaign against Third World Debt, etc; these issues are mainstream (the majority of people in the world are concerned about and/or suffering from the effects of global warming, debt, poverty, pollution, etc … even if nothing much is being done) (4)

It is rather that direct action groups do not go through “normal channels,” do not ask permission, etc. In short, they presume a democracy of participation rather than a democracy of representation (the appearance of democracy). (5)

It is this and only this that today makes them avant-garde. Although one response is the new Prevention of Terrorism Bill which is quietly being pushed through, ironically it is Capitalism itself which is creating a culture of ‘participation.’

Has the artworld (art climate) been a reflection of the political climate (Thatcherism) during the Eighties?

Ironically it is the combination of Blair and Saatchi, which has helped to create the structural change in Britain whereby it becomes a sign of cool to use contemporary art (rather than antiques) to promote London as a global centre for both money and image laundering.

Has there been a shift in the artworld (climate) since the Nineties?

Today the function of the art world is no longer primarily to ensure submission to the aesthetic but instead to police the borders of art whilst at the same time promoting its global consumption.

However, art is a ‘discursive field’ in which anyone can engage in a creative, critical (and politicized) (mis)reading of any work done …

As Walter Benjamin reminds us, it is essential to challenge any historical or contemporary consensus to reveal the social and cultural context (in which art is situated) … to demonstrate that the present is never inevitable.

If confusion dawns with the new millennium as to the role (and value) of art, and if a ‘new social and political art’ turns out to be nothing more than a curatorial initiative to appropriate ‘activism’ into a revitalised status quo rather than as a prelude to structural change, then you can be sure that Art in Ruins will be excluded once again from recent history.

We won’t be assimilated as ruins … (laughter) 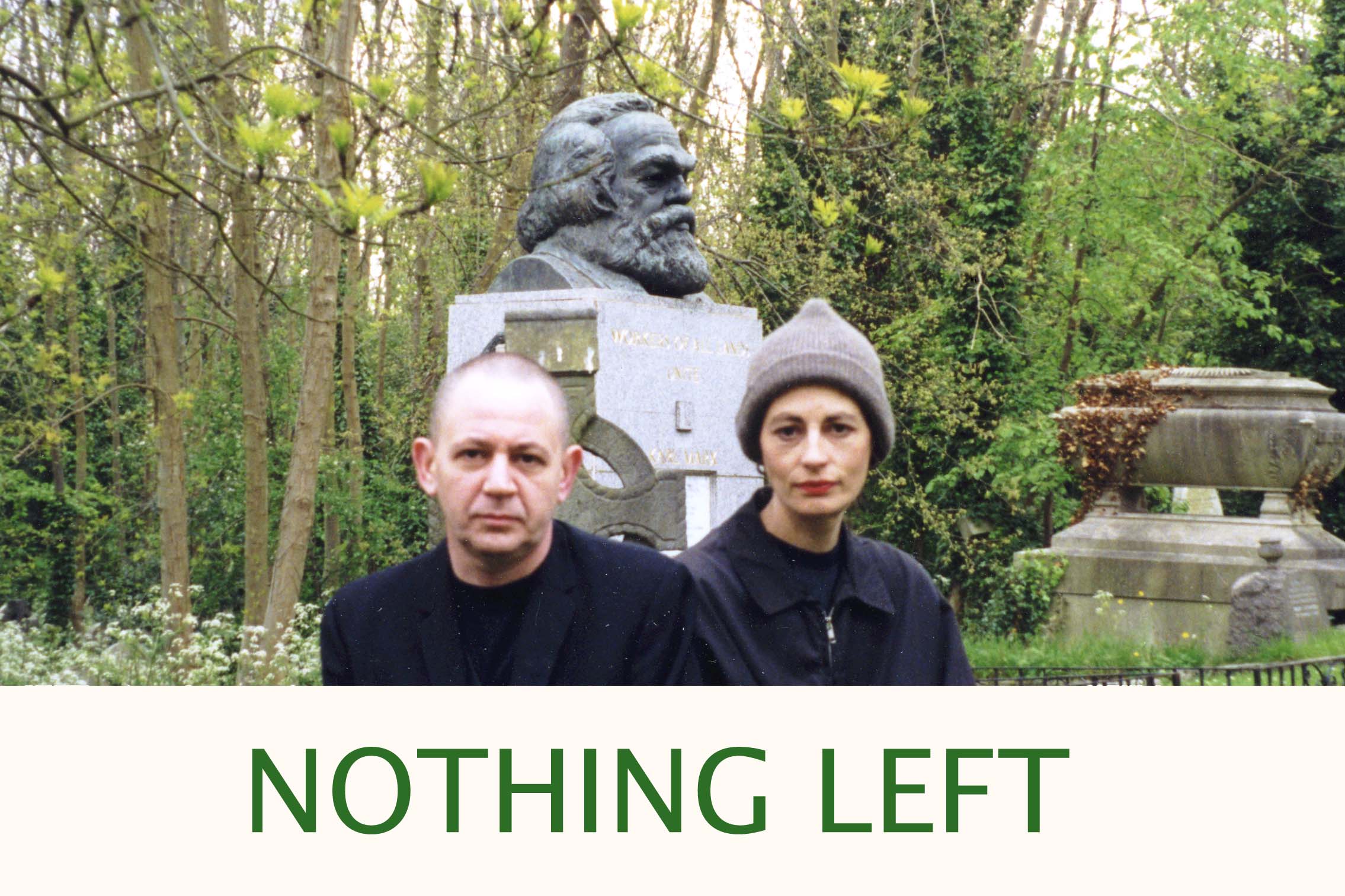 (Unpublished) replies to questions put to Art in Ruins by Helen Sumptor for ‘Art Attacks’ feature in The Big Issue No 403 11-17 Sept 2000 to coincide with ‘Protest and Survive’ at the Whitechapel Gallery, and ‘democracy’ at the Royal College of Art, London, Sept-Nov 2000.

(1) Appearances are Against Us John Hansard Gallery, Southampton. 1999/2000.
(2) The exhibition When Attitudes Become Form curated by Harald Szeemann in 1969 was re-presented as a “readymade” by Achille Bonito Oliva at the Venice Biennale in 2013
Ironically, work from our exhibition Conceptual Debt which re-used ‘impersonal forms and procedures’ (of conceptual art) intended to undermine notions of "individuality, authenticity and originality" and which "anyone can use," was itself later re-presented by a critic unknown to us somewhere in Italy.
(3) "Debt is an index of the unsustainable balance between democracy and capitalism." For more about the debate over the conflict between democracy and capitalism and the transition from democracy to debtocracy c.f. Buying Time: The Delayed Crisis of Democratic Capitalism (2014) and How Will Capitalism End? (2016), both Wolfgang Streeck. London. Verso.
(4) For a combination of Night of the Living Dead Zombie political allegory and Reclaim the Streets activism see: 1000 Gestalten July 2017 G20 performance. Available at https://1000gestalten.de/
See also: Zombies R Us John Whitehead. The Rutherford Institute. 19 July 2017. Available at:
https://www.rutherford.org/publications_resources/john_whiteheads_commentary/zombies_r_us_we_the_people_are_the_walking_dead_of_the_american_police
Zombie Corporations litter Europe Mike Shedlock. MishTalk. 29 July 2017. Available at
https://www.zerohedge.com/news/2017-07-30/zombie-corporations-litter-europe-kept-alive-ecb
(5) See, for instance A European Spring Beckons Brendan O’Neill. 21 December 2018. Available at https://www.sott.net/article/403420
Natural Allies? Why the Post-Modern faux-Left is useless to the Yellow Vest Movement Jim Kavanagh. 19 December 2018. Available at https://www.sott.net/article/403503
The yellow vests, or the discrediting of representative democracy Philippe Marlière. 17 December 2018. Available at https://www.opendemocracy.net/can-europe-make-it/philippe-marli-re/yellow-vests-or-discrediting-of-representative-democracy