Our intervention into the artworld began in London in 1981, with an exhibition in the long corridor of an education institution.(1) This was followed by a series of exhibitions in overlooked spaces – the reception area of an architecture school, the cafeteria of another, a disused railway arch in Bermondsey, an alternative theatre concourse, a community arts centre, the crypt of a Hawksmoor church in Clerkenwell, a local museum and so on.

This ‘assault’ was entirely funded by our full-time jobs; and to save on ideas, time and money we recycled our work in various versions and sizes in various arrangements, in various locations for different audiences.

We never applied for Arts Council funding, as we knew we would not get any. We were also well aware that public funding was then the principle means of controlling which artists did what, and where.

Today it is almost impossible to describe the level of art-world hostility generated at the time by our self-organised activities.(2) 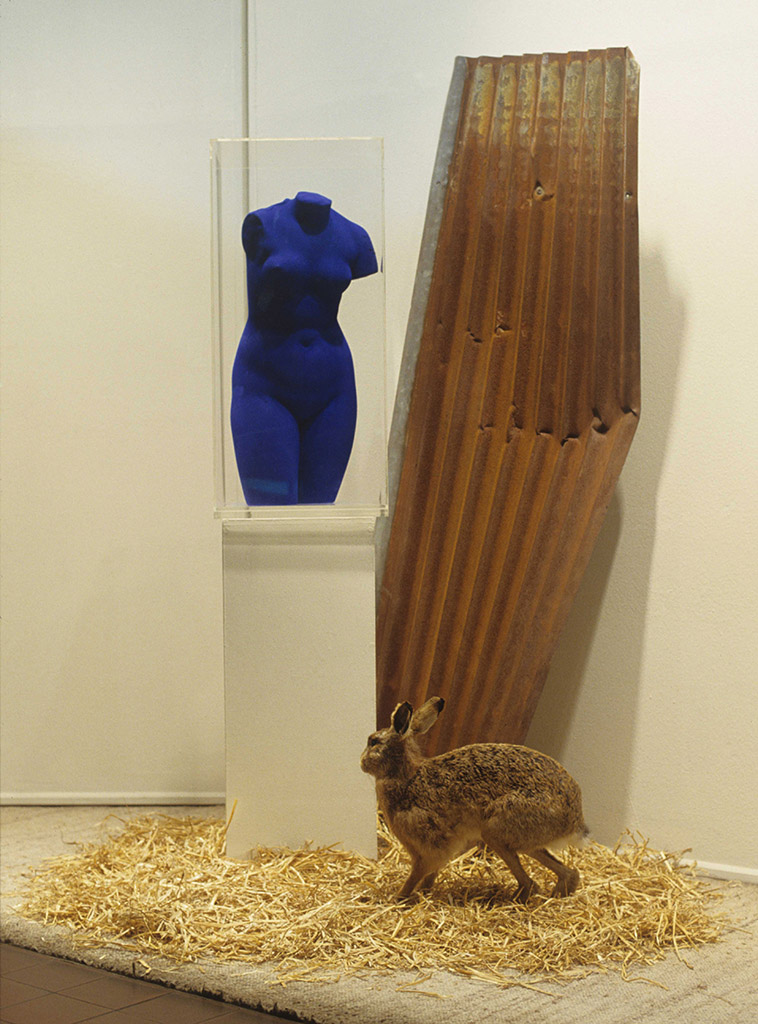 Nevertheless we continued to look out for overlooked spaces and in 1987 we made an exhibition in a blue-chip private gallery in Mayfair with a venerable history and a beige carpet.(3) In the window we arranged an Yves Klein blue Venus owned by the gallery together with a stuffed dead hare, straw and a sheet of rusty corrugated iron.

The gallery needed something to sell so we made some Domestic Arrangements; combine paintings as souvenirs, which the gallery failed to sell.(4)

We were still installing the exhibition when we noticed that the director of the Arts Council had surreptitiously arrived for a sneak preview before the opening, obviously hoping to leave unnoticed.

He was taken aback when he became aware of our presence and realised that he would have to speak to us on his way out.

He came over and said, haughtily “It must be really different for you … showing in a private gallery.”

(1) Popular Front (with John Coleman) at The Institute of Education, University of London 1981
(2) As there were no signs of public funding clearly visible we were designated derogatorily as “rich kids” and, more accurately, as “charlatans” and “upstarts.”
(3) New Realism: From the Museum of Ruined Intentions at Gimpel Fils, London 1987, exhibition and catalogue
(4) There is no work of Art in Ruins in any public collections anywhere