During the era of modernisation, industrialisation was for the most part validated by the critical interaction of the (twin) concepts of the International versus the National(ist), where to be International was, of course, always ‘progressive’ (until, that is, the emergence of various ‘nationalisms’ began to reveal the neo-colonial power relations masked by the concept of Internationalism.)

In our era of postmodernisation, post-industrialisation is validated by the critical interaction of the concepts of the Global and the Local (that is, the Ultramodern, the world of telecommunications, which like most advances made in communications is the result of military research and development; and the Ruin – second-order’ culture, rooted but more or less contaminated by modernization.) An era where, as Paul Virilio says (in ‘The Overexposed City’) “the metropolis is no longer anything but a ghostly landscape, the fossil of past societies for which technology was still closely associated with the visible transformations of substance. a visibility from which science has gradually turned us away.”

With the threat of ecological disaster looming over us, for instance, we discover and begin to care about our One World, and begin to compile a Whole Earth catalogue of local disasters. At the same time global corporations through economies of scale can destroy competitors both local and multinational through the recognition of the power of the “Republic of Technology.” It may even be that the great rush of concern over ‘Green’ issues will do not much more than help break down national barriers in favour of global concerns (facilitated of course by global technology and economics.)

From this cynical perspective the ‘particular case’ becomes today nothing more than Local Colour feeding difference into the Global Network, on which however, through the vampire-value of abstraction, it is parasitically dependent.

Of course, in the face of the onslaught of ‘progress’, no-one wants to be a ruin (a catastrophe of the real) and so, with our rucksacks on our backs we are compelled today, in the name of civilised values, to identify with the mobility of the global network, crossing both time and space (as Modernism and Internationalism demanded.) Should this prove to be physically (politically) impossible, then perhaps today the postmodern reduction of experience, history and memory to ‘signs,’ (or is it a recognition of them as signs?) will allow us to continue our wanderings (through our hyper-real shopping malls or our new museums) unhindered by, that is emancipated from, physical (political) barriers.

Everyday life becomes nothing more than a form of window-shopping and as we wander, as Baudelaire’s artist/flaneur, detached and aristocratic (‘free individuals’) through the cultural supermarket of the postmodern present we are afraid, at the same time, that our sentimental attachments may turn into fatal attractions (‘Liaisons Dangereuses.’)

We wandered under the scorching heat of the sun from the Metro stop ‘Porte de Pantin’ on the north-east periphery of Paris, toward the Grande Halle de la Villette, amongst the Algerian family groups and the school parties all wearing identical rucksacks; for whom the red ‘folies’ of architect Bernard Tschumi’s Parc de la Villette is their local ‘leisure facility’.

Directly in front of the entrance to the Grande Halle we noticed that an articulated lorry was parked. Approaching closer it registers that it is painted ‘folie’ red and is also on Tschumi’s grid, that it supports two large black and white photos of broken marble busts lying on what appears to be a large public square against a background of palm trees. A plaque giving the title “Algerian Folie” indicates that these are photos of sculptures of French colonial administrators awaiting transportation out of Algeria at the end of the Franco-Algerian war.

This piece of work by American artist Dennis Adams, commissioned for the exhibition ‘Magiciens de la Terre’ at the Grande Halle and Centre Pompidou takes up the opportunity of the implied endlessly extendable grid set up by Tschumi at Villette to commemorate Algerian Independence. 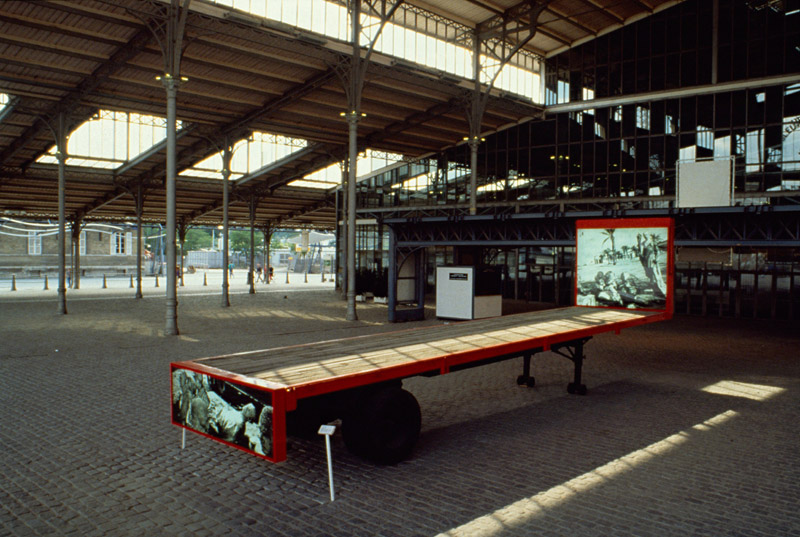 In the context of Tschumi’s project it interprets the grid network as a fragment of a much larger project, one which is continuing to develop through different participation and interpretation, Tschumi having indicated the format (network) but not the limits on content (events). Dennis Adams’ work thus feeds difference into the global network, attempting to ruin the concept of global autonomy.

In the context of Villette as a working class immigrant district of Paris, it problematises the Bicentennial celebrations of the French Revolution going on all over France – liberty, equality and fraternity won for whom?

In the context of ‘Magiciens de la Terre’ – the “first truly international exhibition of contemporary art in the world” – it raises the issue of (neo-) colonialism in art.

However, by having only Western curators selecting the work; by having equal numbers of artists representing the West as represent the ‘Others’ (50:50); by mostly avoiding the issue of marginalised art practices from the West, by declining to have any didactic/contextual material in the exhibition itself; by aiming to privilege visual objects over language and myth on the basis that a kind of international/universal communication across cultures through the emotions and imagination is possible with images/objects; by selecting participants primarily as individuals “striving toward their own spiritual fulfilment” – the organisers engage with the discourse of (neo-) colonialism without making it explicit where they stand.

Jean-Hubert Martin, the organiser (and also director of the Musee Nationale d’Art Moderne at the Pompidou), together with a small team of curators and also anthropologist, ethnologist, critic and historian advisors, spent four years and £8.3 million preparing this exhibition, travelling to all corners of the globe researching contemporary “art” practices. The requirement that any work selected “must communicate sufficiently well in a visual sensuous manner to a Western spectator” or risk exclusion, suggests: that the art must ‘travel well’ too.

Dennis Adams’ is one of a growing band of ‘peripatetic artists’ practitioners who travel the (mostly Western) world with an attitude, as opposed to the tradition of the (static) studio-based artist whose objects (production) travel (float-freely) in the global market. The peripatetic artist is a cultural tourist, but also a resistant body in the one (art) world of global marketing.

Turning back towards the public square in front of the Grande Halle, we were faced with Hans Haacke’s contribution to the show. The existing fountain with its four lions has been painted green and gold, with the water of the fountain pool coloured black – the colours of the flag of the banned African National Congress. Flying from the pole are two flags – the top one the ANC flag flying free, while below the flag of the apartheid Republic is knotted and limp. A plaque documents the assassination in Paris in 1988 of ANC representative Dulcie September.

However, just as there is no Algerian post-colonialist artist in the show to speak for themselves. and neither is there a black protest voice from South Africa; so Adams and Haacke are still only the voice of the humanistic conscience of the white male middle-class subject contracted in to speak on behalf of the Other, while the Other is still only offered the role of Magician.

Just as the enormous explosion of contemporary interest in World Music appears as a celebration of the survival of (contaminated) local difference whilst masking the reality of the unequal power relations between the ‘First’ and ‘Third’ worlds (imported exoticism for us – exported toxic waste for them), an exhibition of World Art can, perhaps inevitably, only privilege the mobility of the curators, who with rucksacks packed set off (on our behalf) to capture surviving Local Colour (for our consumption) and to prove that “we have moved beyond the era of neo-colonialism” to a new era of “global dialogue” in which “we don’t have to feel guilty anymore.”

A “global dialogue” however in which we arrogantly demand that all objects address themselves to us, at the same time that we conveniently forget that whilst we demand that we are ‘free’ to wander from exotic object to exotic object (through either the catalogue – or ‘Atlas’. as it is somewhat grandiosely called – or through the exhibition itself) many of the communities from which these ‘magicians’ come are at present either restricted (by colonial ownership of land rights etc.) from pursuing their historical (or is it primitive?) role as nomadic wanderers; or else are learning the white man’s language and laws (and, as it is somewhat triumphantly claimed in the ‘Atlas’, producing ‘art’ to keep their traditional culture alive – as well as earning much needed finance to pay legal bills) to enable them to re-claim rights to land on which their ancestors have previously lived for thousands of years.

Just as the Global marketing of Coca-Cola attempts to banish all difference through the consumption of the same, with this exhibition the curators’ Global marketing of Beauty (the attempt to reduce these heterogeneous objects and images to an abstract code) presents these objects and images as equivalent, revealing in the process the powerful complicity between market forces (where the commodity advertises itself as picturesque – the arrangement of pleasing and beautiful images) and the culture industries.

However, in the end, these objects. in all their (silent but) glorious (textual and contextual) complexity return us, not only to the kitsch sentimentality of our transcendental categories (forever falling into ruin, forever demanding renewal) but also to the poverty of our own wonderful culture, where everything is celebrated only as a sign of something that it is not; that is to say, a culture where everything is only of value as exchange on the global one (art) world market.
And when we are tired of our eclectic wandering through the global network of abstractions; when we want to return home, we find that home is nothing more than an endlessly refracted collection of fragments acquired on our travels, in whose reflection we are forever trapped.